As per the fossil records spiders have evolved 130 million years ago during the era of dinosaurs. Spiders have venom which they use it for hunting the prey or insects. The venom is not very toxic or lethal in nature and apart from few species of United States it’s not considered very harmful to the humans. We know that many people have a very abnormal fear about spiders because of their frightening looks but they are harmless creatures and in fact vital to the ecosystem because they eat lot of insects, pollinate the plants and replenish dead organism back to earth.

1) Spiders are air breathing arthropods belonging to the category of Araneae (scientific name of the species) spread around worldwide except Antarctica.

2) Spiders are the unique species that have eight legs and can spin webs in order to catch the insects or prey.

3) With more than 42000 species worldwide, spiders are one of the few species which can live in every habitat except water bodies.

4) Lifespan of average spider lies between 2 to 3 years except goliath bird eater (female spider) which has typically larger span of 15-25 years.

5) Female spider can produce thousands of eggs in the form of sacs over a period of time.

6) Spiders can kill millions of prey every year and consume more insects than birds.

7) Very few species of the spiders (widow spiders) are social in nature.

8) They build webs which can in-house thousands of other spiders useful in co-operative hunting and food sharing.

9) Spiders use wide range of tactics for hunting like liquifying the prey with digestive enzymes, spinning a sticky web to trap the insects.

10) All spiders have the ability to produce silk (gets hardened when it comes into the contact of air) which can create web, build sacs and traps.

1) Spiders have the symbolic meaning in many art and mythology and they are considered as symbol of patience and power.

2) Spider-Man is one of the most favourite super heroes of children in comics and movies.

3) Spiders use camouflage technique to protect themselves from predators like birds and bees.

4) Spiders have four to 8 pair of eyes helpful in navigation and hunting.

5) Tarantulas, one of the species of spiders are source of food for Cambodian people.

6) Spider venom has medicinal benefit which is used in the treatment of Alzheimer disease and cardiac arrest.

7) Hummingbirds use spider webs to build their nests.

8) The bite of female black widow spiders is dangerous to humans.

9) Spiders can’t extend their legs outward after pulling it inward; they pump watery liquid with force to push them out.

10) “Bagheera kiplingi” is the only species of spiders which is herbivorous in nature and rest all are carnivorous. 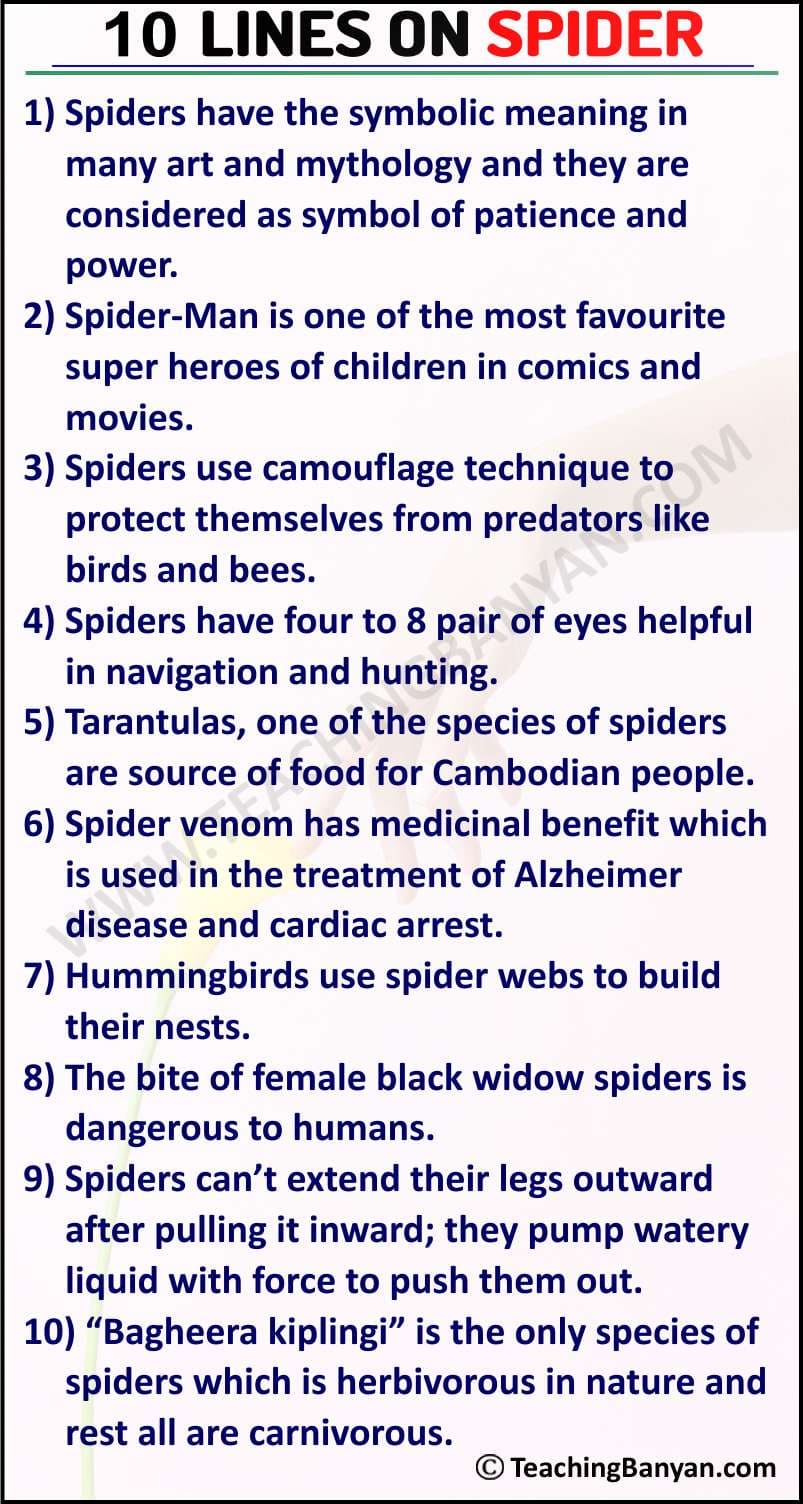 1) Spiders are found all over the world.

2) Around 48000 species of spiders are found all over the world.

3) Spider's origins are believed to be before the Dinosaur era.

4) According to a scientific estimate, spiders originated about 400 million years ago.

5) The spider has eight legs and it belongs to the insect family.

6) Almost all species of spiders are carnivorous; only one species called Bagheera Kiplingi is herbivorous.

7) The blood of the spider is blue like a snail because the spider's blood has copper instead of iron.

8) Most species of spiders make webs, but some species do not make webs.

1) Spiders belong to the group of Arachnida.

2) There is a sac in its stomach from which a sticky substance comes out, from which it weaves a net.

3) The spider’s eggs are found in a little bag woven by tiny threads attached to some unused corner in the house or attic.

4) Spiders can survive for hours underwater by entering a self-induced comma.

5) Spiders are afraid of ants because they contain formic acid which ants like to eat.

6) Spiders have short hairs on their legs.

7) With the help of hair, it is able to feel fragrance and hair also helps them to hold the wall while climbing it.

9) Spiders do not see much farther but some species can also see the lights which even humans cannot see such as UVA & UVB Light.

10) In some species, the size of the male spider is much smaller than that of the female spider.

The only perceived threat from humans to the life of spider is the use of insecticides and pesticides in farming because it can kill spiders in large numbers. Spiders are the useful source of food for birds, lizards, mammals and they help in controlling the population of insects.

They might seem to be awful but they eat harmful pests which are capable of spreading disease like malaria, dengue and plague. Spiders can eat bugs and insects which can damage crops. The design and technique of the spider web has inspired many scientists to make bullet proof vests useful in war like situation. Above facts and figures prove that spiders are one of the most fascinating creatures of the planet.